Every process on your OS is executed from an application code and each process can interfere in other process’s resources. The OS or the VM (if there is any) can provide some security and isolation mechanisms, however it can be different for each OS type and impose difficult configuration.

The image has a layered architecture, each layer contains the differences between the preceding layer and the current layer, and on top of the layers, there is a writable layer (the current one) which is called the container layer1.

As mentioned above, there are some similarities between Docker and a hypervisor in providing isolated resources. The most important difference is their focus and application. If you want a full-fledged OS, the hypervisor is the solution, and if you want a light-weight isolated virtual environment for your process(s), Docker is the answer. For example, if you want to run a MySQL server, Docker is the best choice, and if you want to execute a simulation app with GUI, virtualization is the only choice.

The following class diagram illustrates the overall parts involved in Docker installed on your box. The associations show the relations between these parts and multiplicity of each association end highlights the detail of that end in the relation. 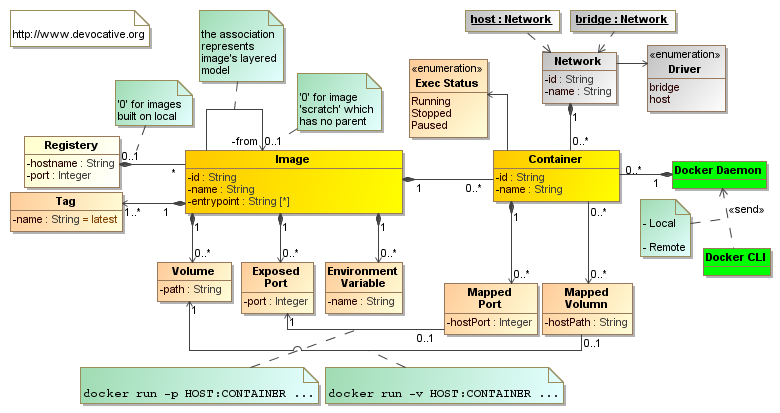 Docker is presented in two editions: CE (community edition) and EE (enterprise edition). Most of the time, people use its CE and also in the case of this tutorial.

The installation is different due to your OS. So the best reference is the Docker site.

After installing Docker, the docker command must be in your path and can be executed from your OS CLI app.

You can config docker daemon via /etc/docker/daemon.json. A common snippet is as follows:

Lets mix up things and create a little bit advanced example to highlight Docker networking. This practical example can be used as a basis for a CI (continuous integration) environment. Following picture shows the final result of the example (note: the IPs can be different when you execute the example). 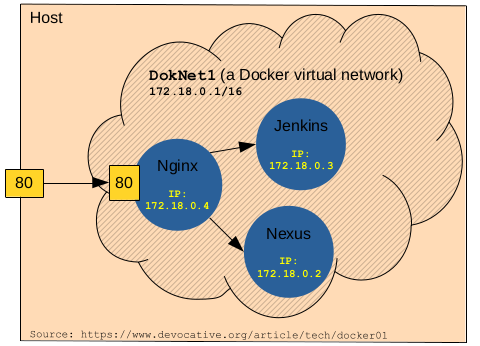 The next script implements above picture: